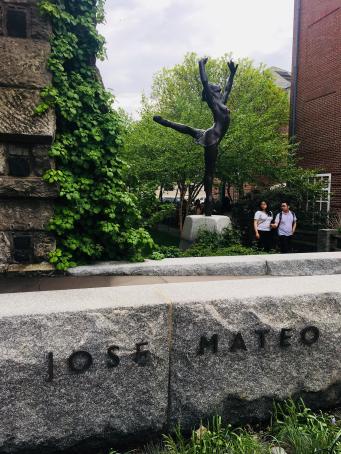 When my daughter joined the Jose Mateo Ballet, trips into Harvard Square became part of my routine. And while I wasn’t excited about fighting traffic, and finding parking, I wanted to see how efforts to improve pedestrian and cycling in Cambridge were going.

I hoped to see if the flow of people, bikes and cars there, could show us how improving walking and biking in Central Square, East Boston, where I live, might help, or hurt mobility through our downtown. 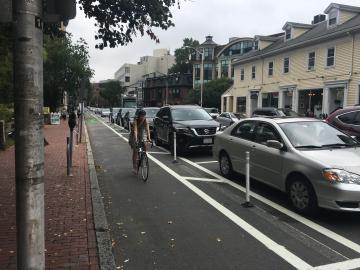 With the Red Line, bus routes, and charter buses branded with Harvard University symbols, bringing people in, the area seemed as busy as ever. On the inbound side of the Square, where auto traffic on Mass Ave. is one-way, the city had installed a parking-sheltered bike lane, along with STOP signs, and extended sidewalks. While volume was high, and backed-up a few times, traffic moved smoothly.

Driving in the area required minor changes in alertness, and speed, but everyone seemed to be adjusting well to one another. Rather than causing conflict, the interactions between motorists, cyclists and pedestrians were good-natured, and added a collaborative social element that enhanced the area.

As for economic impacts: other than a number of small businesses that have been replaced by chain stores over the years, – an element of capitalism that feels out-of-place, the area was as vibrant as ever: The shared-road system hadn’t harmed economic vitality; again, the opposite effect seemed to be present: the street environment seemed safe, orderly, and more navigable.

After finding parking at multiple locations with similar ease repeatedly, I also concluded that parking in Harvard Square had become easier. Rather than the nightmare I expected, I’d been pulling into open, legal spots for weeks! To learn more about who was using the new mixed mobility system, which seemed to be working so well, I took two quick surveys on two separate days. 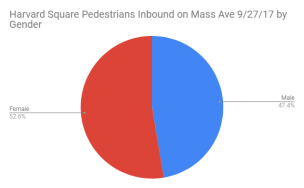 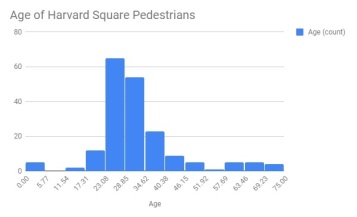 On Day One: I tallied 190 pedestrians heading inbound on Massachusetts Avenue in a sample of just over 30 minutes, on a pleasant October weekday afternoon. For each pedestrian, I recorded gender, and an estimate of age. The pedestrian population was comprised of all ages, but was predictably centered on young 20’s to 30’s.

The age of the late afternoon Harvard Square inbound walkers, appeared to be about 30 years of age. Gender was about even, with slightly more female, than male. There were ‘holes’ in the data, in the teenage, and early 50’s age groups (I assume those groups are present, but not on foot or bike). 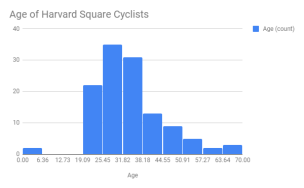 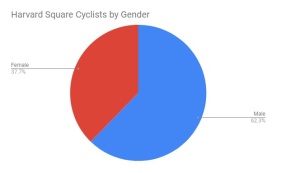 Two days later, I observed cyclists heading inbound on Mass Ave. In the same short time, I observed 122 cyclists, flowing into the Square. Interestingly, more of the cyclists in my sample were female- about 40% of total riders, compared to the national average of about 25%.  The average age of the riders I observed appeared to be slightly older that the average pedestrian: at around 35 years old. Just as with the pedestrian survey, there was a noticeable gap in children and teenaged response, however the early 50’s ‘hole’ was not evident.

What was evident, was that by not driving, the T riders, pedestrians and cyclists in Harvard Square, were reducing traffic and improving the availability of parking. 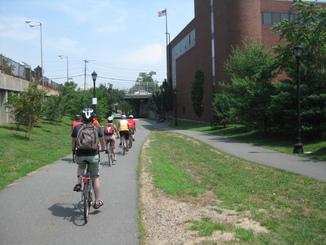 That parking and traffic could be improved, by making room on our roads for for bike and pedestrian travel, might seem strange, but if it’s true, this idea could be an important key to solving otherwise vexing problems in East Boston. We already have an extensive bike and pedestrian Greenway; if use of some of the Harvard Square tactics could reduce traffic and air pollution, while improving our local economy, and freeing up parking, our quality of life, here would go way up.

Friends of the East Boston Greenway is always looking to improve our open spaces. If you want to add your feedback, thoughts, and ideas, and help shape a conversation about parking and traffic congestion, take a few minutes to complete this brief poll:

We were on Zumix Radio!

The Friends of the East Boston Greenway was recently funded by the Barr Foundation as part of its Waterfront Initiative. Three members of the organization were on Whats up Eastie discussing the benefits the community can expect as a result of the grant, and the broader longer term vision the organization has for the Greenway. 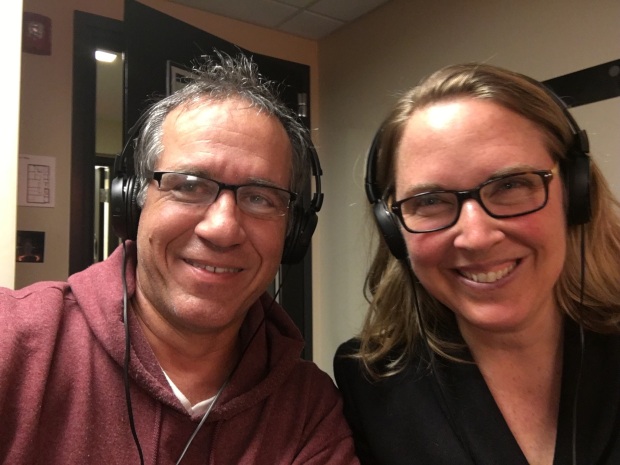 You can listen to the entire conversation on the show archive.

The FoEBG welcome community input. Here are the various you can reach the organization:

About the Friends of Mary EllenW Greenway